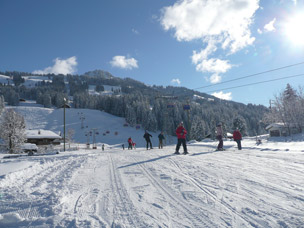 Ski resorts in Switzerland are generally very high meaning, of course, some very high altitude ski areas with excellent skiing conditions and guaranteed snow! There are, however, many glacier ski areas if ever the snow is wearing a little thin at the end of a long season.

Like everything in Switzerland, the ski slopes are perfectly maintained and the lifts are very modern and efficient, giving Swiss ski resorts just that little extra plus point in comparison to some of its neighbouring alpine countries!

Thanks to a versatile ski slope network of more than 180 kilometres, Adelboden cannot be denied a spot in the Swiss premier league. Skiers, snowboarde...Read more ›

Frutigen is a beautiful village with many charming old chalets. Later in the spring, hikers can really enjoy this area across green meadows and fragra...Read more ›

The ski resort of Lenk is split into two parts. Betelberg (2002 m) and Metschstand / Hahnenmoos (2100 m) which are both ideal for less experienced ski...Read more ›

The pedestrian Bettmeralp, which can only be reached by a cable car, has grown into a tourist destination. The village is located on a sunny terrace h...Read more ›

This family-friendly ski resort is located on a balcony in the Rhône valley. In the old part of the village you will still find the typical, sun-tanne...Read more ›

Riederalp is a pedestrian small, family-friendly village in the Pennine Alps. The lifts in this ski resort usually start right at your doorstep which ...Read more ›

Anzère lies on a sunny plateau above the Rhone Valley, at the foot of the Wildhorn massif mountain range. It is a picturesque village that has a lot o...Read more ›

Arosa is a "classic" among the Swiss ski resorts - a good all-rounder. Originally, Arosa consisted of nothing more than two farms until a doctor disco...Read more ›

Churwalden is a small ski resort at 1230 meters of altitude in Graubünden, Switzerland. In winter, Churwalden is not overrun by the skiing masses so t...Read more ›

Since the first lift was built in Lenzerheide back in 1936 to comfortably carry sledge riders back up the mountain, Lenzerheide-Valbella developed at ...Read more ›

Beckenried is located on the south shore of Lake Lucerne, at the foot of the Klewenalp. A local poet named Beckenried the prettiest village due to its...Read more ›

The village of Emmetten is situated on the south shore of Lake Lucerne at 774 meters of altitude. The village has a ski lift connection available to t...Read more ›

In a beautiful setting dominated by numerous Alpine giants and the majestic Aletsch glacier, lies the ski area of Blatten-Belalp. The area boasts some...Read more ›

In the south west of Switzerland lies the village of Mörel, part of the holiday town of Breiten. The village is located in a UNESCO World Heritage Sit...Read more ›

This originally farming village lies in the Rhône valley at an altitude of 1560 metres. The typical wooden cottages, darkly coloured because of the wi...Read more ›

Just below the Julier Pass lies the old mountain village of Bivio with its small ski area. The possibilities for touring skiers are just as amazing as...Read more ›

The cable car Linthal takes guests up to the sunny terrace Braunwald at 1300 meters. Residents too use this form of transport as cars are not permitte...Read more ›

Brig is located on the ancient crossroads where the Simplon Pass crosses the Alps to Italy. Brig is the hub of a web of train routes to Italy and the ...Read more ›

Perched on a sunny high plateau in the heart of the Alps, Crans-Montana offers visitors a magnificent panorama of 200 km over the Alps. These extraord...Read more ›

Rating 8 Based on 2 Reviews

Davos was originally known as a thermal spa health resort that treated patients suffering from tuberculosis. With the opening of the Bolgens lift in 1...Read more ›

Rating 9 Based on 6 Reviews

When monks from Churwalden built a monastery in the Swiss highlands between 1208 and 1222, they were in fact building the cradle of this lovely ski re...Read more ›

For years tourists have returned to Disentis. From the village a large gondola lift will take you to the ski plateau of Caischavedra. From here chair ...Read more ›

In the winter, Sedrun is quite secluded from civilization. In the summer you can access the village from nearby ...1] from the Oberalppass b...Read more ›

Celerina, the charming neighboring village of St. Moritz, is known as the sunniest village of the Engadine. The village is full of Tyrolean wooden hou...Read more ›

Maloja is a village between the Maloja Pass and Lake Sils. The village belongs to the 13 child friendly villages "Fun for Family". Although it has two...Read more ›

In the highest side valley of Oberengadin lies the peaceful village called Pontresina. The village has some beautiful hotels, lovely Engadin houses an...Read more ›

In 1881 the world-famous philosopher Friedrich Nietzsche discovered that Sils-Maria was not just any average mountain village. Nietzsche enjoyed himse...Read more ›

Silvaplana is located at an altitude of 1816 metres near St. Moritz on the road to Chiavenna. The good thing is that the old village centre has manage...Read more ›

St. Moritz is a two-time host resort to the Winter Olympics - in 1928 and 1948 - and a five-time host of the Alpine Ski World Championships. Going eve...Read more ›

Rating 8 Based on 4 Reviews

The Swiss ski resort of Engelberg, near Luzern, little known to most British skiers, has become a modern, world-class ski resort over recent years. T...Read more ›

Brigels is a quiet and charming village that boasts a lovely old town centre that exudes a romantic feel. From Brigels, the center of the "Brigels, Wa...Read more ›

The charming little village of Falera, the smallest of the three here has a ski lift which provides access to the ski area. From Curnius you can ski t...Read more ›

Rating 6 Based on 1 Reviews

The Swiss ski resort of Laax has more or less become part of the neighbouring villages of Flims and Falera. Whereas Flims is especially a traditional ...Read more ›

Rating 10 Based on 2 Reviews

Flumserberg is home to the villages of Tannenheim, Tannenboden, Unterterzen and Oberterzen which together make a great ski resort. What started as a h...Read more ›

Grächen is an authentic Walliser mountain village dedicated to being a child-friendly ski resort. It has succeeded! The village has a pedestrian zone ...Read more ›

Grüsch is a pretty little ski resort with the valley station of the cable car to Grüsch-Danusa Just outside the village. There are free ski buses whic...Read more ›

Château d'Oex has two separate ski areas; La Braye which has 25km of slopes and Monts Chevreuils with 20 kilometers of slopes. They are ideal for fami...Read more ›

Gstaad is a world-famous ski resort in Switzerland, home to the skiing jet set. A favourite with notable stars such as Julie Andrews and Princess Grac...Read more ›

Rating 8 Based on 5 Reviews

Saanen is a nice, quiet village with 1800 inhabitants, 4 km west of Gstaad. The hotels here are generally simpler and slightly cheaper than in Gstaad....Read more ›

Schönried is set on the sunniest terrace of the Gstaad region, at 1230 meters altitude. Via two lifts, the Horneggli and Rellerli, you can explore all...Read more ›

Zweisimmen is an ancient, proud farming village at a crossroads in the Simmental. The Rinderberg-Zweisimmen ski area is just above and close to that o...Read more ›

Samnaun is tucked in the farthest corner of Graubünden, separated from the rest of Switzerland by a chain of 3000m mountain peaks. This partially pede...Read more ›

Beatenberg is a 7 km long village and actually consists of smaller villages Waldegg, Spirenwald and Schmocken. These three villages lie on a sunny pla...Read more ›

Grindelwald is the largest and liveliest village in the ... ski area. Framed by some of the tallest mountains in the Bernese Alps, Grindelwa...Read more ›

Rating 9 Based on 5 Reviews

Interlaken is centrally located between Lake Thun and Lake Brienz and is a good starting point of several ski resorts. Interlaken is a town with 57,00...Read more ›

Lauterbrunnen takes its name from the impressive waterfalls here. It's not really a ski resort, yet it is an excellent spot for a winter holiday. From...Read more ›

Mürren is a picturesque ski resort perched on the sunny mountain side on the west side of the Lütschine river. This ski resort cannot be reached by ca...Read more ›

Wengen is an almost completely pedestrian village in ...can only be reached by train. With its beautiful stylish hotels and the majestic 400...Read more ›

Rating 8 Based on 7 Reviews 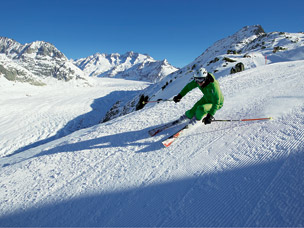 Swiss ski areas at a glance

Many of the Swiss ski resorts are linked together by efficient lift systems, giving access to huge ski areas with only one ski pass. For example, in Verbier, the ski pass covers the whole of its Les 4 Vallées including the resorts of Haute Nendaz and La Tzoumaz, opening up access to all tastes and levels. The world famous Swiss ski resorts of Davos, Klosters, St. Moritz and Flims, Laax & Falera make up the vast 7000 km² Graubunden ski area. Not even the most demanding skiers could get bored in Switzerland! 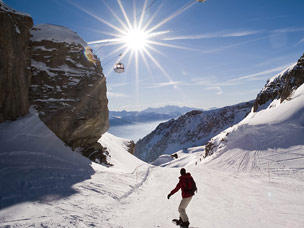 Among the best ski areas in the Swiss Alps for snowboarding is the famous ski resort of Verbier. Host of the Freeride World Tour, Verbier is a top snowboarding holiday destination and is great for both intermediate and advanced snowboarders looking for both on and off-piste challenges. Verbier is home to the Swatch Snowpark at La Chaux which has kickers, boxes, rails and a big airbag - more than 20 structures in total! The park has a “chill-out zone” where you can watch yourself on a large video screen – if you dare! Verbier’s ski area also has only 10 drag lifts which makes it a perfect ski area for snowboarders, in particular beginners and intermediates.

The well-known Swiss ski resort of Saas-Fee is very popular for snowboarding - especially for beginners who need to gain confidence. There are plenty of gentle slopes to practice on and for the more advanced snowboarders, facilities include 1 terrain park, 2 half pipes, 1 quarter pipe and a fantastic boarder cross course. Considering Zermatt has 200km of its own ski runs and access to a huge 360km in total in the Matterhorn Ski Paradise ski area, it goes without saying that snowboarders will be in heaven, just like skiers, with this much terrain to cover. However, freestylers in particular will be thrilled at the sight of the 200m super pipe (among the longest in the world) at the Gravity Park in Zermatt’s own ski area.

The Swiss ski resort of Flims, Laax & Falera, with its new indoor freestyle hall “Laax Freestyle Academy”, (the first in Europe), along with huge investments offering modern ski holiday accommodation and new après-ski options, has now become one of the most popular snowboarding holiday destinations in Europe. You’ll even wonder if there are more boarders on the slopes than skiers in Laax… 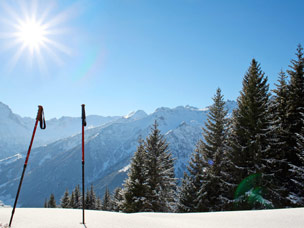