Paradiski came into existance in the 2003-04 ski season, when the Vanoise Express double-decker cable car (the only one of its type ever made) which links Les Coches (La Plagne) with Peisey-Vallandry (Les Arcs) was installed. The Paradiski linked ski area, with over 425km of ski slopes, 3 glaciers and two mountain peaks that reach 3000m of altitude, has something to offer every skier and snowboarder - whatever their level and style of skiing or snowboarding. Paradiski is the third-largest ski area in France, after Les Portes du Soleil and Les Trois Vallées. As 70% of the slopes lie above 2000m altitude, Paradiski offers reliable snow cover for skiing holidays all winter long.

While much of the ski area is composed of high-altitude glacier slopes, Paradiski also has many lovely slopes below the tree line. Skiing in Paradiski presents fantastic views of the magnificent Mont Blanc, which can be best enjoyed from the top of the Aiguille Rouge lift (3226m). The ski area includes skiing on two glaciers, the Varet glacier (accessible via the Aiguille Rouge cable car in La Plagne) and the Chiaupe glacier (accessible via the Bellecôte gondola in La Plagne). The Aiguille Rouge is renowned for its off-piste terrain and is the starting point for a 7km descent towards Villaroger. Paradiski is a bona-fide cross-country skiing destination as well, with 150km of trails for nordic skiing between La Plagne and Peisey-Vallandry. Cross-country skiing in this region is a wonderful way to enjoy the views of Mont Blanc at a slower pace. The ski resorts of Paradiski are some of the easiest ski resorts to reach by air and by train from the UK.

Overview of slopes and lifts in Paradiski

Slopes for every level

The ski resort of La Plagne, in the Paradiski ski area, is made up of 11 villages equipped with numerous ski lifts. The heart of this ski area is the "La Plagne Centre“. Here, there are plenty of easy-to-access nursery slopes for first-time skiers, although every level of skier is spoilt for choice on the slopes of La Plagne. Les Arcs, in the Paradiski ski area, is made up of four ski resorts: Les Arcs 1600, Les Arcs 1800, Les Arcs 2000 and the new Les Arcs 1950. Here the diversity of choice for intermediate skiers is almost unchallenged. Most of the main ski runs have an easy and a more difficult alternative, meaning that skiing here is ideal for mixed-ability groups who want to ski together. Recently self-proclaimed 'home of the snowboard' Les Arcs does hold a certain attraction for boarders with its excellent facilities. The Bellecôte area boasts a plethora of challenging red and black slopes for more advanced skiers. With 27 black runs to choose from, even the most demanding skier will find a challenge here in the Paradiski area. This winter, Les Arcs is launching what might just be the world's first "business class" ski pass. Skiers and snowboarders can elect to pay more for their ski pass to enjoy priority at lifts and other exclusive advantages. The concept of business class is familiar to anyone who's ever travelled on a plane or even a train, but it's the first time the concept is being tried out in a ski resort.... More ›

Winter is finally in full swing and many of us are looking forward to our first ski holidays of the season. Ah, to experience that feeling of fresh snow under your boots, to breathe in the wonderful mountain air and carve your first tracks through the virgin snow! We decided to kick off our season in the French Alps, exploring the huge Paradiski linked ski area, and it didn't disappoint!... More › 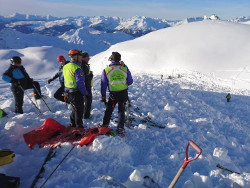 A young skier in the French Alps is lucky to be alive after a brush with an avalanche on Boxing Day. The 12-year-old boy was skiing at La Plagne in the French Alps when he got caught in an avalanche which carried him dozens of metres down the mountain and separated him from his group. Rescue workers said the chances of survival after being buried in an avalanche for so long were slim to none. The boy can thank the search-and-rescue dog who sniffed him out from under several feet of snow.... More ›

The information applies for the ski area of Paradiski. During the ski season information is updated daily.