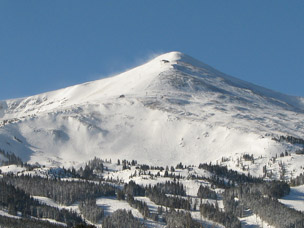 North American ski areas are known for their highly efficient, fast ski lift systems and this means you will rarely come across few queues and you will enjoy seemingly deserted ski slopes. As with most things in the US, all ski lift and ski run grooming equipment is modern and high tech. In North American ski resorts, you are guaranteed excellent skiing on slopes that are immaculately groomed even after the heaviest snowfalls!

For powder hounds, North American ski resorts, such as Aspen and Breckenridge are simply heaven on earth! Thigh-deep powder is a regular phenomenon in North American ski resorts and snowfalls in the US are often measured in meters after one dump! The climate is very dry and the ski resorts are usually further away from the sea making for perfect off-piste conditions. You will not find the same super-ski areas as you find in Europe, but North American ski areas are a lot more versatile – you can ski almost anywhere! The ski area boundary is clearly marked and patrolled - including off-piste areas which is reassuring for those venturing off-piste for the first time. The ski run grading system is not the same as in European ski resorts – colours are replaced by diamonds! A red run is a “single diamond” run, and a black run is a “double diamond” run!

Alta is populated with people who live and breathe to ski, and you’ll find a hardy yet welcoming crowd on your visit here. When it combines its terra...Read more ›

When the price of silver plummeted in 1893, Aspen's prosperous years as a mining town were over. It was only after World War II that they discovered a...Read more ›

It is often said that Beaver Creek is even more elegant than St. Moritz! Even more luxurious and even better services - hard to imagine. The American ...Read more ›

Located just to the northwest of breathtaking Yellowstone National Park, Big Sky boasts one of the largest ski areas in North America and was the wint...Read more ›

Breckenridge has a characteristic Wild West feel to it. The original main street of this Colorado town is extremely well preserved, and it's true that...Read more ›

Rating 9 Based on 4 Reviews

The base areas is really a cluster of three villages: East Village, Center Village and West Village. West Village is the best pick for beginners than...Read more ›

Rating 9 Based on 3 Reviews

Situated in northern Lake Tahoe, Northstar has been owned by Vail Resorts since 2010 and now presents itself as a glitzy, stress-free destination ski ...Read more ›

Originally a ski area in its own right, Canyons merged with Park City Mountain back in 2014 to create one of the largest combined ski areas in the US....Read more ›

The Powder Mountain Resort ski area is located in Utah, not too far from the ski resorts that hosted the 2002 Winter Olympics. An abundance of fresh ...Read more ›

Alpine Meadows has a true West Coast vibe, with a local population of laid-back skiers and snowboarders who are happy to welcome you to the place they...Read more ›

The pedestrian, European-style Village at the Squaw Valley base area gives easy access to the pistes and offers a selection of restaurants, shops and ...Read more ›

Once a Wild West town, Steamboat has retained its authentic and unpretentious vibe. The family-friendly resort receives an average of 9m of snow year...Read more ›

Perched at the end of a picturesque canyon in southwestern Colorado’s San Juan Mountains, Telluride has a long and colourful history. The former mini...Read more ›

"Almost like Austria" is what people often say when visiting Vail for the first time. The houses in Vail look similar to those in the Tirol, giving th...Read more ›

Winter Park Resort is home to some fabulous skiing, not only downhill but also cross-country, with some 120km of cross-country skiing trails to its na...Read more ›