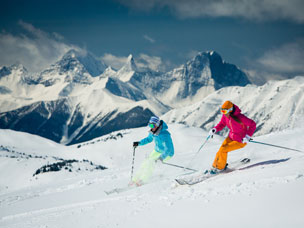 Skiing in Canada is something that everybody should try at least once in their lifetime. Whether it’s the champagne powder of the Powder Highway, the challenging terrain of the Pacific Northwest or the gorgeous glacier lakes of the Rocky Mountains, skiing in Canada is sure to be an unforgettable experience.

Canadian ski areas distinguish themselves by their liberal approach to snow grooming: almost the whole mountain is accessible and it’s not rare to see skiers weaving through the trees at the sides of the pistes. Glades, moguls, couloirs… not for nothing is Canada known as the “Great White North”!

Banff is perched at an altitude of 1463m above sea level in the heart of the enormous Banff National Park. This was Canada's first and the world's thi...Read more ›

Situated in the Rocky Mountains in Alberta, Canada, Castle Mountain Resort has almost 100km of ski slopes for all levels. Despite the generous terrai...Read more ›

Fernie Alpine Resort, in interior British Columbia, is famous for its mounds of fresh powder snow. Surprisingly, it has yet to be discovered by the m...Read more ›

The ski resort at Kicking Horse grew out of a local ski hill after the overwhelming majority of local residents voted to develop the terrain. A few d...Read more ›

Located in the heart of Canada’s renowned Powder Highway, Kimberley Alpine Resort is a quintessential Canadian ski resort with terrain for every level...Read more ›

Lake Louise in the Canadian province of Alberta is a peaceful destination where the emphasis revolves around nature. A handful of restaurants serve up...Read more ›

You’d be hard-pressed to find more breathtaking scenery than at the Jasper National Park, largest park in the Rocky Mountains, where old-growth forest...Read more ›

Mont Tremblant is arguably the best ski resort in Eastern Canada, with 96 slopes and a variety of terrain for all levels. Although relatively low-lyi...Read more ›

Panorama Mountain Resort is one of few ski resorts in the Canadian Rockies to have a proper village in its own right. The charming, walkable village ...Read more ›

Skiing at Red Mountain started in the late 1800’s when Scandinavian miners came to nearby Rossland to try their luck with the gold rush and subsequent...Read more ›

SilverStar is an attractive Okanagan ski resort, modelled after a typical mining town and a favourite with families. Skiing here is the typical Weste...Read more ›

The ski resort of Sun Peaks is situated near the city of Kamloops in interior British Columbia, Canada. The resort has a decent-sized but walkable vi...Read more ›

The Canadian ski resort of Whistler in British Columbia is on most skiers’ bucket lists and gained even more international renown after the 2010 Winte...Read more ›