10 January 2019 from Danielle in Live from the slopes

Winter is finally in full swing and many of us are looking forward to our first ski holidays of the season. Ah, to experience that feeling of fresh snow under your boots, to breathe in the wonderful mountain air and carve your first tracks through the virgin snow! We decided to kick off our season in the French Alps, exploring the huge Paradiski linked ski area, and it didn't disappoint!

Together with my colleague Max, we visited the 425km of slopes in Paradiski, which is one of the largest ski areas in the world. For me, contemplating this fact was like being a farm boy visiting the big city for the first time. The largest linked ski area I had ever visited before was the Zillertal Arena, and Paradiski is more than twice as large! The most important ski resorts within Paradiski are La Plagne and Les Arcs. Most hotels offer ski-in, ski-out access to the pistes. Add in the number of wide, gentle slopes and you'll understand what makes this such an attractive ski area for beginners and families. There are also excellent opportunities for freeriders at the Aiguille Rouge, so really, any level of skier or snowboarder will feel at home here! For our stay, we opted for the Club Med Les Arcs Panorama, located in Les Arcs 1600. 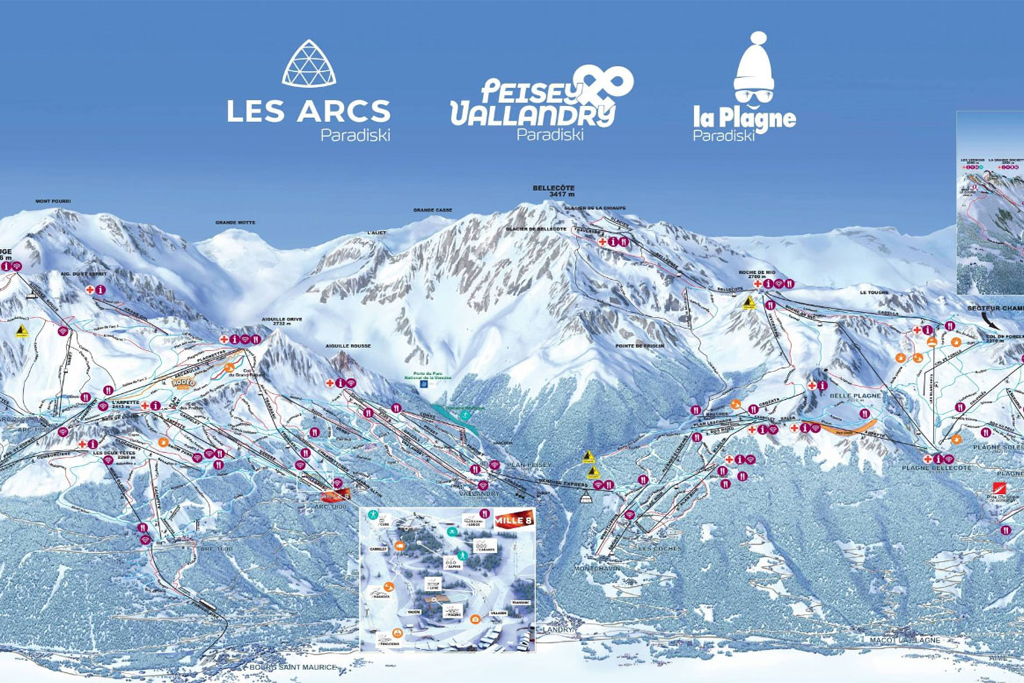 We flew into Geneva, where the first white mountain peaks greeted us. From here it was a two-and-a-half-hour drive to Club Med in Les Arcs. The route is scenic, passing by the crystal-clear Lake Annecy and the town of Albertville, which hosted the 1992 Winter Olympics. We were naturally tired after the long trip, but the closer we got to the snow, the more our spirits lifted! At the Les Arcs 1600 motorway exit we got our first precious view of the slopes. We were finally back in the snow!

Thanks to Easy Arrival Services, we didn't have to worry about any logistics the morning after we arrived. We had pre-booked shoes and snowboards and they were ready and waiting for us in the lockers. From our room, it was just a few minutes to get to the slopes, which were open exclusively for Club Med guests that day. There's nothing better than the feeling of first tracks after a long summer without snowboarding - although we found ourselves noticing how much time it had been since we had exercised our snowboarding muscles! The view of Mont Blanc and the surrounding Savoyard mountains is breathtaking, and we enjoyed lap after lap of the pistes before heading over to the freestyle show organised by the hotel. Skiers, snowboarders and even BMXers tore up the slopes with impressive jumps and flips. When the show was over we relaxed in our room and got ready for the rest of the evening: supper and cocktails. The day was perfect, but tomorrow promised to be even better: there were thick white snowflakes swirling down outside!

The Mont Blanc 4 chairlift takes you directly to the hotel

Day 2: Am I dreaming, or is that powder?

Just like the first day, the second day was chilly. A hearty breakfast helped us recover from the events of the previous evening, and the sting of the cold mountain air on our faces soon had us in tiptop shape again. Today we set off in the company of Luc, our ski guide. We figured a ski guide would be a great way to get to know the best parts of the huge ski area, leaving us free to enjoy the surroundings without muddling over the map. We skied some pistes, visited some of the other villages and ascended the ski area's highest accessible summit, the Aiguille Rouge (3226m). In the span of three hours, we didn't take any lift more than once! After warming up on some easier slopes, we tackled the fresh powder, definitely the highlight of the day!

As long as you're not intimidated by the sheer size of the ski area, Les Arcs is the perfect destination for a relaxing ski or snowboard holiday. Two of the biggest advantages are the ease with which the slopes can be reached, and the reliable snow cover (70% of the slopes lie above 2000m altitude). Paradiski is suitable for any type of skier, from beginner to expert. While Les Arcs books up quickly during high season, you can escape the crowds by travelling outside of school holidays and finding the quieter pistes - you have 425km of pistes to choose from! Hopefully we'll be back to Les Arcs one day to visit Luc, eat cheese fondue and visit the glaciers. Thanks, Club Med, and au revoir!

Our colleagues Yvonne and Miranda are currently "stuck" in Obergurgl thanks to closed road...
Read review