6 November 2019 from Danielle in Tips

Skiing off-piste and exploring the backcountry are enticing options for advanced skiers. Virgin powder, beautiful scenery and the chance to be in nature without the crowds seems to draw more and more freeriders every year. But off-piste skiing comes with its own set of risks, and it's important to be equipped with the skills and tools to stay safe in the backcountry. While avalanches can happen to even the most experienced skiers and boarders, you can increase your chances of survival by properly preparing yourself. This article is meant as a taster of how to stay safe in avalanche country and is not meant as a comprehensive guide. Before you go off-piste, register for a formal avalanche training course, equip yourself with avalanche safety equipment and know how to use it.

What causes an avalanche?

Avalanches of snow and ice are almost always the result of dangerous conditions, plus a trigger - often a skier or snowboarder who's carving a line through virgin snow and dislodges the top layer of the snow bank. These "slab avalanches" could potentially happen to any snow bank at any time, but they are more likely to happen on slopes measuring between 30 and 45 degrees (snow doesn't stick as well on slopes steeper than 45 degrees, so there's not as much accumulated snow to come tumbling down). If you're planning on skiing on backcountry terrain, it's a good idea to bring an inclinometer to measure the slope. That way, you can avoid avalanche-prone lines.

Scoping out the terrain

The first factor you'll need to consider is the stability of the snowpack. An unstable snowpack often forms when it snows a lot in a short period of time. This doesn't give time for the snow layers to bond properly, and can cause weak spots where the layers will fracture and break off. A good rule of thumb is to avoid skiing on avalanche-prone terrain within 24 hours of a snowstorm where it's snowed more than 30cm. Watch out for wind-loaded snow, and take the lay of the land into consideration - what's called the "runout". Narrow gullies where you can get trapped, steep drop-offs that an avalanche could push you over, clumps of rocks or trees that an avalanche could drag you through are all things to watch out for. Don't be fooled into thinking that a shallow slope or a slope with recent ski tracks is safe - these can still produce an avalanche. And don't forget that while most avalanches that catch skiers are triggered by those same skiers, it's also possible to be caught in a natural avalanche. As you ski, listen for the snow of the snowpack shifting and collapsing underneath you. This is known as "whumpfing" and is a clear danger sign indicating an unstable snowpack. Look out as well for cracking snow, hollow-sounding snow and exposed trees and rocks that suggest a thin snowpack. Finally, be on the watch for signs of recent avalanches, such as squashed trees, which raise the possibility that similar slopes nearby might also produce avalanches in the near future.

Equipping yourself for backcountry skiing

Always carry an avalanche transceiver (switched to on), a shovel and a probe when venturing into the backcountry. You should wear your avalanche transceiver on your person, not your pack, in case your pack gets whipped off you when the avalanche hits. And it's not enough to have the equipment on you - you and everyone in your party should also know how to use it. You also have the option of bringing other safety equipment such as a helmet (you should be wearing one anyway!), reflective clothing, a mobile phone or radio, a first-aid kit, an ava-lung that can get you breathing oxygen while you're under the snow, or an inflatable backpack that will prevent you from sinking to the bottom of the avalanche debris. 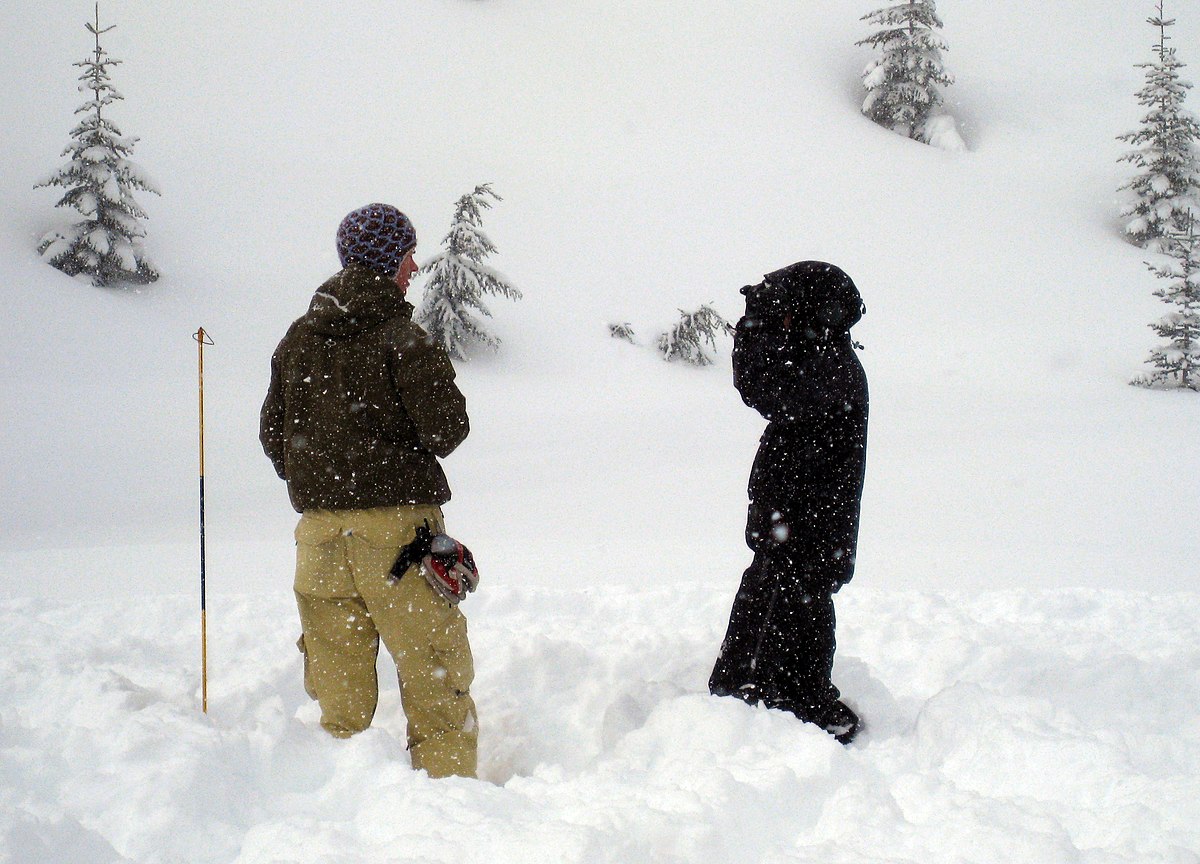 How to proceed off-piste

Your chances of triggering an avalanche start as soon as you set foot on avalanche terrain, whether you're still hiking uphill or already carving out your first line. As much as possible, stick to less-steep slopes and, if possible, thick clumps of trees on the climb up. Identify runout areas and escape routes. Once you're ready to ski down, leave some space between each member of your group, and make sure the rest of the group is out of the avalanche risk zone and any trigger zones. This way, you reduce the risk of everyone being caught in the avalanche at the same time. Keep an eye on each other so that if an avalanche hits, you know where to look for your partner. If you feel like the top layer of snow is heavier than the layer underneath, making for difficult skiing, this is another avalanche warning sign.

What to do once an avalanche hits

Avalanches come in all shapes and sizes, but even the smallest ones can drag you over a cliff if you're very unlucky. First things first, try to ski out of the way of the avalanche. Failing that, try to grab onto a tree. People who have survived being buried in an avalanche say it feels like being in a washing machine - the snow and ice quickly reaches speeds up to 130km/h. It's generally advised to kick your skis off and get rid of your poles as soon as the avalanche hits, although a protruding ski may also help the rescue party find you. As soon as it hits, you should try your ultimate best to "swim" your way to the surface, keeping your teeth clenched, mouth closed and head up. Once the avalanche comes to a stop, it only takes a few moments for the snow and ice to compress like concrete on top of you and cut off your access to oxygen. Try to clear an air pocket around your mouth and nose so you can breathe, and if you're close to the surface, try to stick your hand out to make it easier for your rescue party to spot you in the snow.

Finding someone buried in an avalanche

Assuming they haven't suffered a serious injury, the chances of a person surviving an avalanche are around 90% if found within 15 minutes, but drop to just 20% after 45 minutes and keep dropping from there. So, once the danger of the avalanche is past, it's important to work quickly to find the buried victim. Try to remember where you last saw them and look for clues such as gloves or goggles to identify where they could be. In your avalanche safety course, you'll have learned how to use the transceiver to find the general area where the victim should be, then jab your probe into the snow in an outward spiral pattern to locate the victim. It's also important to learn an efficient shovelling technique that will preserve the airway of the buried skier and avoid caving in the snow even more on top of them. Since you might have to shovel a lot of snow, it's also important to find a shovelling technique that doesn't tire you out too much, all while allowing you to work as quickly as possible to increase the victim's chances of survival.

What to do after the avalanche

Your work isn't over once you've found the victim. Backcountry skiers are often out in the wilderness, far from any medical facilities. Here's where the first-aid kit and basic first-aid skills will come in handy! It's also a good idea to have warm, dry clothes and/or an emergency foil blanket, as well as some food. While your recently unburied victim might kick up a fuss at taking refuge in the snow again, an impromptu snow cave may be the best option for seeking shelter overnight if it comes to that.

Check the avalanche report before you go

Always check the avalanche report, usually provided by the local ski resort or weather office, before venturing off-piste. In Europe, avalanche risk is measured on a scale of 1-5. It's important to note that just because the risk of an avalanche is only 2 or 3, this doesn't mean a slope between 30-45 degrees and a recent dump of snow will be relatively safe. The avalanche danger scale applies to the overall conditions, and certain slopes may be more avalanche-prone than others. If it's your first time or you don't know the area, don't hesitate to hire a guide. Aside from knowing the safest routes, a guide can help show you the best powder stashes and sickest lines!

There is no substitute for an avalanche safety course when it comes to preparing yourself to venture into the backcountry. Instructors will give you hands-on demonstrations of how to find someone buried in the snow using their transceiver, your probe and your shovel. They will show you how to test the stability of the snowpack, and point out signs that indicate routes that are likely to be unstable. In the course, you'll also learn about the different conditions that affect snowpack stability, such as temperature, wind, vegetation, orientation and precipitation. An avalanche safety course can't guarantee you'll never be buried in an avalanche, and it can't guarantee you'll be successful in finding your buried friends under the snow. It takes years of practice to hone the skills required to stay safe in avalanche country, and even experienced skiers and snowboarders have perished in avalanches. Take a refresher course every once in a while, and practise your avalanche survival skills regularly.

Remember, every year many professional skiers are involved in fatal avalanche accidents. You can be an avalanche safety expert with all the equipment and still die in an avalanche. The best way to stay safe is to avoid being caught in an avalanche in the first place. With fees for sports equipment starting at £35, it’s worth thinking hard about what items you absolu...
Read review Tips 29 Sep
Guide to buying ski goggles: Everything you need to know

There are many things to consider when buying a new pair of ski goggles, from the different types of...
Read review Tips 16 Sep
FAQ: What to do when you see a skiing accident or are involved in one

Do you know how to act when an accident occurs on the slopes? Here we'll answer some common question...
Read review